‘No run, no fun’ is a familiar saying among fishermen, referring to the lack of fish caught when there is little water flow. Conversely, too much run can make fishing difficult.

We can take advantage of currents when fishing from a boat, positioning ourselves and using the current to place our baits. This is more difficult when land-based.

For land-based anglers, an effective solution when conditions are tough is to use a Grapnel Sinker. 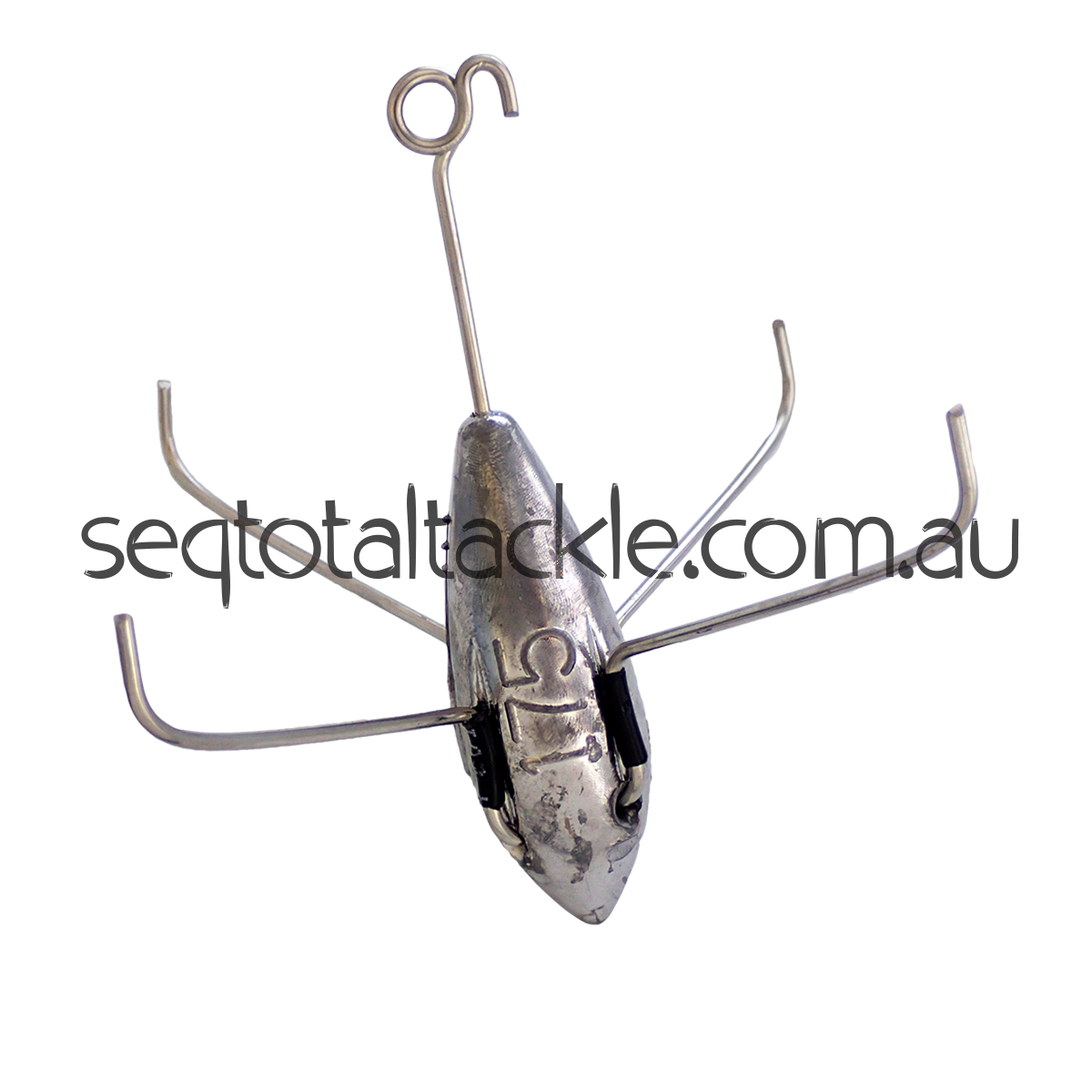 Grapnel sinkers, also known as breakaway or breakout sinkers, are made for land-based anglers. We can use them when fishing off the beach, off the rocks or in estuaries.

They are the ultimate sinker for holding baits in position in a strong current.

Grapnel Sinkers are designed with four wires or prongs that help to anchor them to the bottom where current or sweep would wash away conventional fishing weights.

While larger grapnels used for slide baiting serve a very specific purpose, we can use different sized grapnels in a variety of ways.

A common problem when fishing the beach is a strong side sweep quickly moving the bait out of gutters and strong tidal surges washing it ashore.

Using grapnels on the beach is an effective way to target most beach species when conditions are tough. The grapnel will keep your bait in the strike zone with little influence from strong current, side sweep, and tidal surge.

In most conditions, a smaller weight of grapnel can hold position compared to conventional sinkers.

Grapnel sinkers are as effective in estuaries as they are on the beach and are rigged the same way. When fishing land-based, grapnels will anchor the bait in place in otherwise difficult to fish conditions.

We use them in fast running current to position baits in channels and close to structure. Casting grapnels close to bridge pylons is an excellent method for targeting structure dwelling species in a fast-moving current.

The grapnel sinker has been around for many years and for land-based anglers it’s an exciting way to fish for species previously thought out of reach.

The Grapnel sinker is an essential tool for Slide bait anglers who have been onto this bit of kit for a while. They are getting big baits out into the action on some serious fish from land-based locations.

From the beach and off the rocks, this is an amazing way to hook up to big fish using an innovative technique.

We have developed a Heavy Duty Grapnel (Slide Bait Sinker) designed specifically for this type of fishing and have had some great feedback. As a result, we have developed and evolved our design.

Our heavy-duty slide bait grapnels have a more aggressive design compared to our standard grapnels for stronger holding ability in tougher conditions.

With our bait holder design, these are also suited for casting large baits out in the surf without the use of a slide.

Grapnel sinkers are a great tool to target big fish using slide baiting techniques. They are also very effective in the smaller sizes for targeting fish in estuaries and off the beach in tough conditions.

Estuary anglers are using these to keep baits in the strike zone, hard up against pylons and structure, and in the fast-moving current.

They can also be very effective on the beach where current is ripping through inshore gutters and strong tidal surges wash baits ashore.

We have a less aggressive style grapnel sinker perfect for this type of fishing where there is less strain compared to slide bait fishing applications.

Grapnels are a versatile sinker and can keep your bait where it needs to be in otherwise difficult to fish conditions. They are an innovative way to target a wide range of species.

This is done by manually releasing the grapnel wires and bending inwards to tighten the action or outwards to loosen the action.

They are then secured firmly against the sinker. Different conditions, grapnel size and bait used will determine the strength of the breakaway action.

Choosing the Right Sinker- The Basics of Fishing Weights